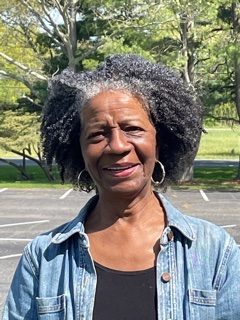 She had been giving some thought to volunteering but just wasn’t sure which organization to contact. One day she was socializing with a neighbor and friend who were volunteering for Meals on Wheels and after that conversation she was convinced that she should contact Meals on Wheels which was over 4 years ago.

When we asked Brenda if she had any funny experiences about delivering meals she actually had a couple to share.

“ At one of my Pittsgrove stops, the client complimented my car and then went on to tell me that he liked BMWs better. When I told him my husband had a BMW, the client told me to bring my husband and his car next time. “

“At another client’s home, there were chickens roaming about in the yard. After I handed the meal to the client, one of the chickens began to chase me – and yes, I ran. I almost made it back to the car when the chicken caught me and pecked my leg before I was able to jump in my car.”

Brenda was born, raised and educated in Philadelphia. She has lived in Pittsgrove for over 40 years; she is married and has 1 daughter who is a psychiatrist and resides in Southern California with her two adorable granddaughters.